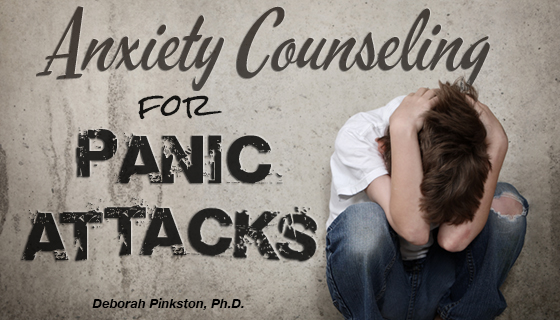 Many people all over the world suffer from panic attacks, and I was one of them. One day when I was 17 years old, out of nowhere I suddenly felt an incredible sense of fear and dread come over me. My heart started racing, I broke out in a cold sweat, and my hands started shaking. I had the urge to get up and run out of the room, but I didn’t know where I would go! My skin burned all over and I felt like I couldn’t breathe. I was nauseous and felt faint. Slowly the feelings faded, but I was left with a pervasive feeling of anxiety and dread.

What had just happened to me? Was I going crazy? Was I about to die? I didn’t tell anyone what was going on in my head. I thought that if I was going crazy my parents might take me to a psychiatrist and I would be placed in a mental institution. Now those thoughts seem irrational, but at the time they were very real and dealing with this fear became my daily routine. Not knowing what had happened to me was the worst part of the ordeal.

I lost weight and lost interest in activities that once were enjoyable. I spent most of my time trying to figure out what was happening to me and how I could avoid it. This became a vicious cycle as I felt anxious about having another panic attack, and the anxiety fueled the panic. After several weeks I felt as if I was trapped in a prison of my own making and there didn’t seem to be a way out.

I finally stumbled onto an article about panic attacks, and finally I knew that what I was experiencing had a name! What a relief to find out that this was something that many other people had experienced! Knowing that I was having “panic attacks” was the first piece of the puzzle.

I read all I could find about this disorder, but at that time it was pretty slim. The internet was not widely used (maybe not even in existence at that time) so I had to rely on the local library. I found out that brain chemistry has a lot to do with panic attacks, as it does with depression and other mental illnesses.

I also learned that my thoughts could either hurt or help my brain chemistry, and I worked hard at turning my negative, self-pitying thoughts to positive ones. It was hard work! The brain naturally wants to take the path of least resistance, meaning that it doesn’t like change and wants to continue the “stinkin’ thinkin” if allowed to. I had to make a daily, hourly, moment by moment deliberate choice to say “NO” to those thoughts, and think of something positive instead…ANYTHING positive! Sometimes all I could find to think was the pretty blue color of the sky, or to give thanks for a part of my body that works well such as my feet. The point was to find something positive to replace the negative thoughts.

Negative thoughts come into our heads uninvited, like mosquitoes that buzz around us and decide to land on our skin to have a meal. It is our choice, however, whether we let the mosquito sit there and feed on us, or if we brush it away! I also like the saying “You can’t stop a bird from sitting on your head, but you can stop it from making its nest in your hair”.

Brushing away the negative thoughts and replacing them with something positive is hard work but well worth it!

Many people take medication for their panic disorder. Some doctors prescribe tranquilizers, aimed at reducing the anxiety that produces the panic attacks. Tranquilizers can be effective in reducing anxiety but they are addictive and don’t really treat the cause, which is unbalanced brain chemistry. Antidepressants are more effective in the long run (not initially) because they work on improving the neurotransmitter supply which in turn helps the individual to feel more calm and positive. Antidepressants are not addictive and take about 2-3 weeks to begin working. They are usually prescribed for a 6 month period and sometimes for life, depending on the person.

From Panic to Peace

Panic attacks are the body’s way of going into alarm mode, the “fight or flight” response to a threat. Sometimes there is a real threat, but often there is no real danger. Sometimes is it the result of chronic stress, illness or trauma that can lower our endorphins and send our bodies into this panic mode.

Learning as much as you can about panic attacks is the first step to finding relief. Training your mind to think the thoughts that will improve your brain chemistry is the next step. Relaxation exercises and meditation are also very helpful, as is exercise.  A later article will explain the ABC’s of retraining your mind to think in ways that help alleviate the anxiety.

Medication, specifically an antidepressant, can balance the neurotransmitters in your brain, helping you to naturally feel more calm. Support groups are helpful and there are many online support groups open to anyone needing help. Panic attacks are horrible things to experience, but with education, support, retraining our thoughts, and medication, peace is entirely possible!