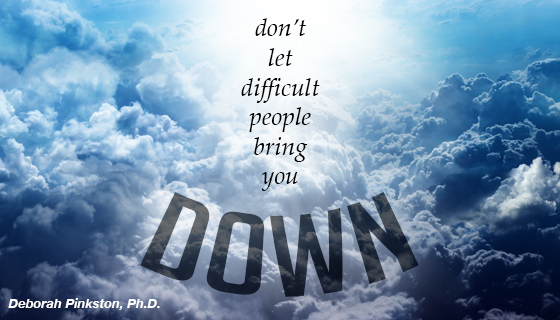 I’m the kind of person who generally likes most everyone I meet, and I think I’m basically likeable and easy to get along with. I respect others and don’t want to intentionally harm anyone. If you’re like most people though, at some point in life you’ll run into a difficult person who decides from the moment they meet you that you’re the enemy, the competition, or out to get them. No matter how hard you try to show them that you’re not against them, that you’re on the same team, and that you mean them no harm, they continue to be antagonistic. They may accuse you of being something you’re not. They may accuse you of doing things you haven’t done, usually after knowing you for a very short time without ever giving you a chance. They may start rumors about you, or try to turn others against you. They will be looking for your every fault, in order to point it out to others. They may try to sabotage your relationships, and take people away from you that you cherish.

You may have tried to “make peace” with this person, extending the “olive branch” over and over, but no matter what you do, this difficult, critical person finds a way to turn things around and use your best efforts against you. The more you try, the deeper the hole you find yourself in, with regard to this person. The love and respect you extend, they shape into an arrow and fire it back at you. You may feel discouraged, hurt and angry because you haven’t done anything to hurt this person but they are having a field day with your efforts at friendship.

Here are a few things that I’m learning (not there yet but still learning):

This DP (Difficult Person) will not change because of your efforts and gestures of goodwill. They will only change when they come to the end of themselves and risk losing everyone and everything they hold dear. They may have an “AHA” moment of self-analysis and realization, when they understand that their hateful behavior not only hurts others, it hurts them. Sometimes though they never change and die old, lonely, hateful people. So don’t waste your energy trying to reform a DP. Don’t hold your breath.

Realize that most DP were not born that way. They have become who they are because of many hurts, abuses, and bad influences or examples. Usually the hard exterior is a protection for the hurt child inside. This isn’t a conscious thing, and the DP would deny it to the death…but the fact is that people develop defenses to protect themselves from further hurt. So realize that your DP may be hurting you but they are hurting worse on the inside.

Don’t continue to pursue a relationships with this DP. You should be respectful (even when they aren’t), and cordial. Anything more than this will probably backfire so don’t strive for something that isn’t going to happen.

Realize that it’s not your problem. You don’t have a problem with them, they have a problem with YOU. It’s their problem, so put it back on their shoulders. Don’t take what they say to you personally. I tell my counseling clients: 99% of what people do and say to you doesn’t have anything to do with you. It has EVERYTHING to do with the person who said it…it’s about what’s in their heart, it’s about their baggage.

Send them to “Siberia” in your mind. My Dad, who was a Pastor for years, and had a couple of difficult people in every church he pastored, said jokingly that he wished he could send all the difficult people of his congregations to do mission work in Siberia. Let them fight it out amongst themselves! So send “you-know-who” to Siberia…in your mind. Don’t let them occupy any space in your mind.

Put boundaries down. DP’s don’t usually do well with direct boundaries because they don’t know how to respect others. You’ll need to use indirect boundaries, such as limiting the time you spend in their presence, not answering emails or texts, or living in another continent 🙂 You may have to get up and walk out of a room, or stop returning phone calls. You don’t owe them anything.

Finally, forgive them for their past, present and future jabs at you. Assume that they will continue to try to make your life difficult, but decide you won’t lose your peace of mind over this DP. They have lost their peace of mind already, so you hang on to your peace.

I hope this has been helpful and I welcome respectful comments. Comments from DPs will be ignored!